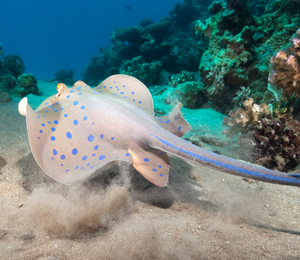 That phrase "don't judge a book by its cover" applies just as well in the animal kingdom as it does in the lives of humans. Our world is filled with creatures who look fearsome, but in reality are gentle and slow to anger.

Case in point: the stingray. Visitors to the Bahamas have been enchanted for years with the colonies of stingrays there that flock to tourist attractions in the hope of receiving a handout.

The southern stingray is the most common species of stingray in the Western Atlantic Ocean, and as a result remains the most visible for travelers enjoying a Bahamas snorkeling experience.

Despite its wicked looking tail, the southern stingray is known as an opportunistic forager rather than a predator. What this means is that it feeds on small crustaceans and several types of shrimp.

Stingrays are sometimes found alone, but are more frequently found in Bahamas snorkeling destinations in larger colonies. They tend to enjoy the sunlight in shallow waters, allowing swimmers to mingle among them. Some tourist-heavy locations provide shrimp and other foodstuffs to visitors so that they can feed the stingrays. After offering the food, a stingray will often pass over the swimmer's hand, pulling the food from their grip with a sensation not unlike a gentle vacuum. The stingrays seem to thrive on the attention, even enjoying light stroking on their leathery skin.

The only danger - and it's a remote one - to tourists is the possibility of treading on a stingray as it lays submerged in the sands, but this is uncommon in high-traffic areas.

At the end of the day, it would be hard to deny the allure of these fascinating and strangely appealing creatures.