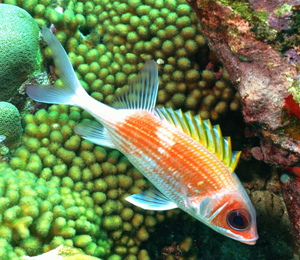 The beautiful colors and exotic creatures you'll see when snorkeling in Nassau Bahamas are simply unparalleled. From the reefs and underwater plants to fish and other animals, you'll be hard pressed to find such variety anywhere else. One of the most unique animals you can expect to see during your underwater adventure is the squirrelfish.

Typically found in tropical waters, the squirrelfish is most often seen at relatively shallow depts. near the shoreline to approximately 590 feet deep. A nocturnal species, the squirrelfish is more often found hiding in crevices as well as amidst coral reefs during the day. These locations serve as hiding spots for the fish to help it avoid predation. At night, though, the squirrelfish makes its rounds in hunt of prey and is generally found swimming among the seagrass and above the sandy sea bottom.

You'll know the squirrelfish when you see it by a few key characteristics. The fish has a relatively slim body that is seen as oval-shaped. Making it more unique, though, are the fish's eyes. Large, round and "squirrel-like" the eyes are how the squirrelfish received its common name. The squirrelfish's coloring is also quite unique. Its body is typically a reddish orange and features flecks of gold throughout. In addition, the fish has light, iridescent stripes that flow through its scales. Fairly small in size, the squirrelfish generally reaches about 9.8 inches in length.

While you will not frequently see the Squirrelfish on a retail market, you can certainly enjoy it as a beautiful sight on your snorkeling trip. It's quite a sight with its large, protruding eyes and exciting, electric color.