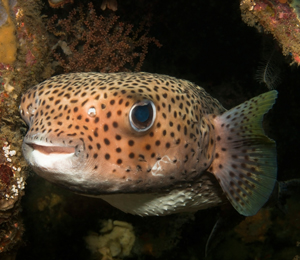 One of the delights of snorkeling in Nassau Bahamas is getting an opportunity to see the porcupinefish (Diodon hystric) swim gracefully around in its natural habitat of colorful tropical reefs. Often referred to as the blowfish (and sometimes called the balloonfish or globefish), porcupinefish can ingest water or air, giving their bodies a bloated, balloon-like appearance. Inexperienced divers often confuse the species with the poisonous pufferfish, but the fish is not poisonous and poses no threat to people snorkeling in Nassau Bahamas. In fact, the fish is a gentle creature, and only engorges itself with water andndash; andldquo;puffs upandrdquo; andndash; when it feels threatened. The bloating is, in essence, a defense mechanism, and although you may think it fun to make the porcupine fish puff up, your dive master will ask you to refrain from doing so.

The Porcupinefish has a sloping, streamlined body that is whitish (and sometimes a pale yellow) in color and covered in circular black spots. The species has a tendency to hang out in heavy reef cover, where it uses its bugged out eyes to keep a close watch out for predators. The animals are slow-moving and docile swimmers with wide mouths, and are jokingly referred to by some as the cows of the Caribbean.