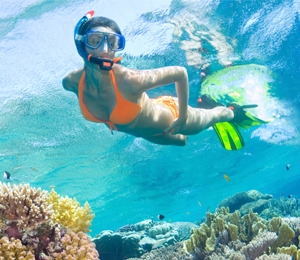 The waters surrounding the islands that make up The Bahamas are full of astonishing marine life. Naturally occurring and man-made reefs allow for an array of tropical fish and plant life to thrive. Bahamas snorkeling is a phenomenal way to experience this marine life in its natural habitat. Areas off the coast of Nassau, New Providence and Paradise Island contain coral reefs and both ship and aircraft wrecks.

Many of the foremost snorkeling reefs are located off the Coast of New Providence Island. They include Gambier Deep Reef, Love Beach, Goulding Cay Reef, Little Elvis, School House Reef and Nari Nari. Gambier Deep Reef is located northwest of New Providence Island-approximately nine miles from the nation's capital, Nassau. The coral reef provides food and shelter to a variety of tropical fish and extends almost 80 feet below the surface.

Love Beach Reef is located west of Gambier Village. The coral reef is situated on 40 acres of a protected, underwater reservation. The rocks adjacent to the reef contain a wondrous assortment of marine life including parrot fish, gigantic spiny sea urchins, fan and brain coral, queen and gray angelfish, damselfish, gray and yellowtail snapper and butterfly fish. The venomous lion fish also frequents this area, and must be avoided at all times.

Goulding Cay Reef is located a short distance off the western coast of New Providence. This shallow reef is composed of primarily Elkhorn coral and home to colorful, tropical fish. During low tide, the top of the reef is only nine feet from the surface and extends about 30 feet to the bottom of the sea.

Little Elvis is located off the northwest coast of New Providence Island. This reef has enormous plant and fire coral and is home to an abundance of eels. Another snorkeling attraction, School House Reef, is located in South West Bay, which is southwest of New Providence Island. This shallow reef has a wide array of coral and abundant marine life including blennies and gobies as well as schooling yellowtail snapper.

Nari Nari is located on the western tip of New Providence and is an excellent place to see sting rays. The area also contains an aircraft wreck, the Cessna, which was deliberately sunk for the movie, Jaws IV and sits only 25 feet deep. The reef is considerably shallow, making it an ideal location for Bahamas snorkeling.

Ship's Channel Cay is a reef located many miles off the coast of Nassau. Here, snorkeling among mangroves is common. Marine nurseries are home to juvenile gray snappers, barracudas and grunts.

Another popular reef in the Bahamas is Rose Island Reef, which is located three miles east of Paradise Island. This shallow reef is a popular attraction with plenty to see, including the ship wreck, Alcora. The Alcora was a drug-smuggling ship purposefully sunk after it was seized by the Bahamian government in 1983. The wreck sits deep at 80 feet and is in an upright, visible position.

Bahamas snorkeling is an adventurous and educational experience, as well as fun and exciting. There are many different coral reefs to visit, each one as unique as the other, with their own special eco-systems, waiting to be discovered.