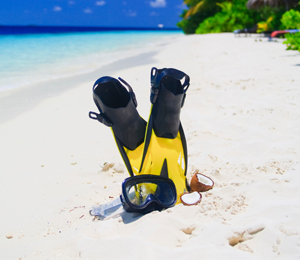 Snorkeling traces its roots through more than 5,000 years of rich history and development. Scientists have found significant evidence that indicates the earliest free divers were actually sponge farmers on the island of Crete in the Mediterranean Sea back in 3000 B.C. At that time, the ancient divers used hollow reeds in lieu of a modern snorkel, which enabled them to continue breathing while underwater. As technology became more advanced throughout the following centuries, more complex equipment allowed humans to begin exploring the mysterious blue depths of the ocean and start the long road to the modern Bahamas snorkeling we love today.

Ancient bas-relief paintings believed to date back to 900 B.C. have been found of Assyrian divers utilizing animal skins filled with air in order to pierce the ocean's surface more effectively. The divers would carry these skins along with them to their dive sites in order to increase the amount of time they could stay submerged and explore. In 333 B.C., Alexander the Great commanded the invention of the world's first diving bell, which was an immense apparatus specifically designed to capture an air pocket when lowered into the ocean. With this diving bell, divers had the ability to inhale breaths without having to resurface from the water.

With the Scientific Revolution and Renaissance running rampant through Europe, diving bell technology reached a newest peak in 1538. In order to demonstrate the latest advancements of their inventions, two Greek men performed an astonishing show for the public surrounding the Tagus River of Toledo, Spain. Using a large kettle, the two divers descended all the way to the bottom of the Tagus riverbed and then returned all the way back to the surface with perfectly dry clothes. Even more surprising to their captive audience, the men brought with them a candle that was still burning bright.

While this newest diving bell technology was beneficial for letting people stay underwater for longer periods of time, it was quite inefficient in terms of mobility. Therefore, new attempts turned to discovering a method for divers to breathe from the air above the ocean surface. In one of his many writings, Aristotle described divers breathing in air from a long tube connected to the air above the water and compared the equipment to an elephant breathing through its trunk. Another famous bright mind, Leonardo da Vinci included several innovative designs for diving devices among his long list of inventions, including a simple snorkel tube that leads past the surface towards air and an entirely self-contained diving suit similar to those that scuba divers wear today. An early sketch from Leonardo da Vinci even showed a basic design for webbed swimming gloves, which could be considered the earliest forerunner for modern fins.

Unfortunately, people quickly began to discover that diving tubes connected to the surface of the ocean were extremely limiting. Even with the strongest set of lungs imaginable, it was impossible for human beings to take a breath below one or two feet due to the high water pressure. However, scientific minds continued attempting to find an effective solution until a whole new world of diving opened up in 1771. British engineer John Smeaton completely transformed underwater exploration with his ground-breaking invention of the air pump. Since air was now able to move through pressurized tubes with an air pump, divers were able to dive deeper into the oceans than was previously possible. Eventually, these technological advancements lead to the invention of the Self-Contained Underwater Breathing Apparatus, which we now affectionately nickname SCUBA.

Not only did modern technology help improve more complex, technical diving equipment for breathing underwater, it has completely revolutionized all of the other vital tools as well. Within a short period of time, new designs began creating pressurized diving suits and chambers to outfit divers on the deep trek under the sea. Improvements with the materials of rubber and plastic helped create the first masks and goggles with treated glass for optimal diver safety. Divers became equipped to better withstand the corrosive atmosphere of the ocean and receive a better view of their surroundings. Effective and simple to use snorkeling fins were also developed to enable all kinds of divers the ability to navigate the waters like a fish.

Ultimately, all of these advanced upgrades in diving equipment have been it possible to enjoy exploring the ocean much easier than ever before. In order to experience the rich history of improvements and advancements we enjoy today, it is highly recommended that you sign up for your own Bahamas snorkeling or scuba diving adventure!