History of Snorkeling in the Bahamas 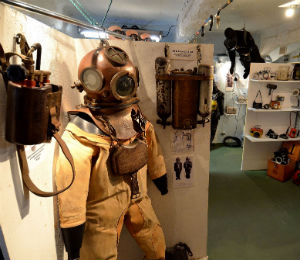 Snorkeling, or using a breathing tube, mask, and swim fins to observe underwater environments, is one of the top recreational activities in the Bahamas today, and with good reason. Because it requires less physical activity and technical know-how than SCUBA diving, snorkeling is more accessible to a wide variety of ages and experience levels. Advances in snorkeling equipment over the years have made Nassau snorkeling easier than ever, with more ergonomic tubes and sleeker fins. Surprisingly, however, these modern marvels of underwater engineering have ancient roots, and the history of snorkeling in the Bahamas can be traced back thousands of years, to a very different place and time.

The first written depiction of an activity that closely resembles snorkeling is an account by the ancient Greek philosopher Aristotle, who describes divers using “instruments of respiration” to help them breath the air above the water’s surface. He likens these instruments to elephant’s trunks, and comments that such a “lengthened nostril” allows the diver to remain underwater for extended periods of time.

It’s most likely Aristotle was referring to skin divers off the coast of the island of Crete, who for centuries had used hollow reeds to help them breathe beneath the waves while they collected sea sponges. This practice came in particularly handy around 500 B.C., when the Greeks again used breathing tubes to move unobserved beneath the Persian fleet, cutting the ships from their moorings and foiling a planned naval assault. Despite this setback, in 1300 AD the Persians contribute their own major advance to the history of snorkeling: the diving goggles (which they fashioned from thin, highly-polished slices of tortoise shell).

Leonardo da Vinci, perhaps most famous for his paintings, was also a great inventor, and a man obsessed with making the impossible possible. Along with designs for flying machines, advanced weaponry, and manned submarines, Leonardo worked on a snorkeling mask that would allow divers to breathe through a tube attached to their helmet. His one concern: that someone would use his design for nefarious purposes and use his snorkeling technology to commit murder or damage property.

Although the famous American statesman, Benjamin Franklin, created a design for wooden swim fins in 1717, it wasn’t until the 1930s that a Frenchman by the name of Louis de Corlieu decided to make “swimming propellers” out of rubber. His fin design became wildly popular with swimmers, and eventually became the essential piece of snorkeling equipment we know today.

Snorkeling in the Bahamas

The Islands of the Bahamas creates an ideal seascape for snorkeling, and the snorkeling has probably been in practice in the area for some time. As far back as the 1600s, settlers on the islands have made their living from beneath the waves, salvaging shipwrecks and harvesting sea sponges much as divers had done off ancient Crete. No doubt these early Bahamians also discovered how to extend their time underwater, and used that knowledge profitably.

Today, Nassau snorkeling remains a profitable industry, but it now caters to recreational divers interested in viewing the vast array of aquatic inhabitants that call this archipelago home. Boasting the third largest barrier reef and some of the clearest waters in the world, the Bahamas truly represent the pinnacle of today’s snorkeling experience, and a point in history where modern technology and nature's awesome beauty converge.