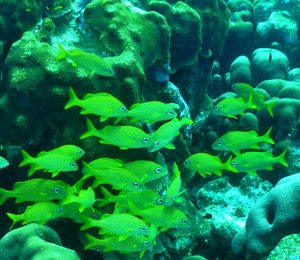 Observing French grunts and blue-striped grunts in their natural tropical reef habitat is one of the most wonderful things to see while snorkeling in the Bahamas. French Grunts (Haemulon flavolineatum) and Blue Striped-Grunts (Haemulon sciurus) are extremely common in the reefs of the Caribbean, and probably one of the first species most divers see after diving under the water.

The French grunt has an oblong shape with a blunt head, and a somewhat compressed body. The fish is white, bluish, or yellow in color with yellow or orange stripes. The fish's most distinguishing visual characteristic are these stripes, the top three of which are straight, while the remaining stripes are set in a sort of diagonal pattern. The French grunt is easy to spot on dives because they are known to swim in huge schools that often number in the neighborhood of thousands of fish. They can be seen swimming over coral reefs (particularly elkhorn coral), and near ocean ledges. Juvenile French grunt tend to favor more coverage, and can be seen hiding in seagrasses or near lagoons.

The head and body of the blue-striped grunt are actually yellow in color. The andldquo;blueandrdquo; in its namesake comes from the horizontal blue stripes that streak across the fish's body. The stripe under the blue-striped grunt's eye makes an interesting arch pattern that stands out when you see the species up close. Growing up to 18 inches long, the blue-striped grunts that populate the Bahamas are usually about a foot long. The fish predominates in thick mangroves, reefs, and thickly vegetated seagrass beds.

Interestingly, adult blue-striped grunts form groups as they suspend themselves above rocky ledges and coral reefs. Scientists have observed blue-striped grunts facing and then pushing one another with their mouths open. Marine biologists do not know why the fish do this, but the action is thought to be some sort of mating ritual or territorial defense.