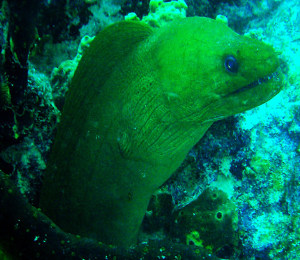 Bahamas snorkeling is a great way to get a close up look at the ocean's remarkable creatures. Green Moray Eels can be observed and safely admired by snorkelers and divers in the tropical waters around Bermuda and the northern Gulf of Mexico as far away as Brazil.

Their huge size makes them appear rather intimidating. The green moray are one of the largest of all eels. They are also the most common. Growing up to 2.5 meters long and weighing close to 30 kilograms, their bite would truly be dangerous. Fortunately, for Bahamas snorkeling, green morays never attack humans unless provoked.

The green moray has several aliases including black moray, green eel, green conger and green congo. Their dark, olive green color is due to a yellow mucus-like substance which covers its blue skin. This substance actually provides the green moray with protection against bacteria and parasites.

The dark green color of the green moray eel often allows it to camouflage in the reef, helping it to elude its predators. Camouflaging extends into its mouth, which is a good thing for the green moray as it constantly needs to open and close its mouth and mover water over its gills for respiration. Its large mouth and sharp teeth can be even more intimidating than its size. A long dorsal fin extends the length of its muscular body and ends with a short tail fin.

Luckily for its prey, the green moray eel has very poor eyesight. Additionally it is a night predator and must rely on its sense of smell. It feeds on fish, crabs, squid and octopuses. It has been seen eating an octopus whole or tentacle by tentacle. They even indulge occasionally on another eel, making them a cannibal of sorts.