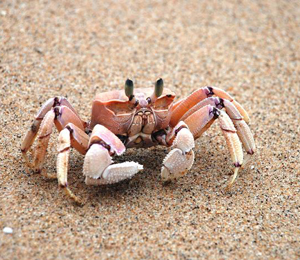 Crab dishes are gourmet favorites. However, the land crab, found in the Gulf of Mexico area and throughout the Caribbean, is probably rarely seen on a Bahamas snorkeling trip. This land crab isn't really a sea animal. It lives in the low-lying areas close to land. Its legs extend a foot from side to side, and its meat, which is considered a special delicacy, is white and sweet.

In some areas of the Caribbean and the Bahamas, the large land crab population leads to an extraordinary journey. It occurs in June when the crabs begin a trip from their burrowed homes to the sea. This fantastic undertaking sometimes becomes a five-mile venture to lay their eggs. Perhaps some 40,000 eggs in one area are laid by the females and fertilized by the males. Once in the sea, the eggs become a kind of larva, called a zoea. The zoea begin another incredible journey, this time back to the area of the original burrows. Only a few survive. Those that do become land crabs.

The land crab mostly survives on grasses and leaves that are located near its burrow. The crab is a popular food choice in the Caribbean, the Bahamas, and South America. Harvesters have reported collecting as many as 400 crabs in a single evening during the migration period.

Different species of crabs are found in southeastern North and South America. A Bahamas snorkeling venture is an exciting way to discover a gourmet delicacy.