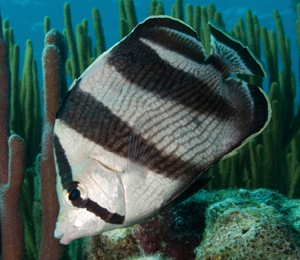 Nassau snorkeling excursions may present you with the opportunity to see a Banded or Four-Eyed Butteflyfish (or both). These favorites of underwater explorers exist as the only Butterflyfish species present in Carribbean waters. The Banded Butterflyfish can be recognized by its thick, black stripes along the sides of its body. The Four-Eye Butterflyfish, on the other hand, exhibits almost a pin stripe pattern of diagonal lines, but is most recognized by the large spot near its posterior end. The spots are visible on both sides symmetrically, and give the illusion of an eye, hence its name.

Butterflyfish, not to be mistaken with angelfish who have similar shaped bodies but dorsal fins that are lacking on a butterflyfish, are seen most commonly drifting along the tops of reefs in shallow waters. Butteflyfish are usually found in pairs, and have a very easy going nature. Younger butteflyfish typically feature a brownish yellow hue rather than the primary white found on a mature specimen. Banded Butterflyfish as juveniles also feature a spot at the end of their dorsal fin, making them similar to the Four-Eye Butterlyfish. The butterflyfish's general behavior is to sleep during the night and feed during the day. To avoid predators, butterflyfish will often hide away in narrow crevices and small caves.

The diet of a butterflyfish usually is made up of anemones, coral, an occasional crustacean, and tube worms. They have the ability to clean away parasites off of other fish.