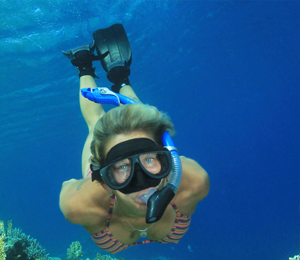 You've worked hard, saved your pennies, and now it's time to pack your bags and jet-set off to the Caribbean for some fun in the sun. You've got a million and one things to pack into a few days, but sitting somewhere near the top of your list is throw on a mask, slipping on some fins, and spending some time exploring the best snorkeling sites the Bahamas has to offer. Worry not, you're spoiled for choice when it comes to options, but because we don't want you to get overwhelmed, we've got a few spots for you to consider:

For those calling Freeport homebase, Grand Bahamas offers a buffet of fabulous snorkeling spots. There are a number of snorkeling outfitters to load up with every piece of gear you'll ever need, and a boatload of excursion options to seek out the hottest spots. Ben's Cave, a snorkeling favorite, is one of the two inland holes located the Lucayan National Park. A unique feature (among many) is fresh water that floats on top of a layer of salt water. Silver Point Reef is another must see with it's virtually limitless visibility and various colorful coral beds.

It's hard to believe that the waters surrounding the heavily populated New Providence and Paradise Islands could be so tranquil. There are more snorkeling sites than anyone could imagine, so if you're based in Freeport, you may want to considering doing a little island hopping to check out this part of the country. Make way for the Rose Garden Reefs, a series of very shallow reefs nestled alongside Rose Island, just a few miles off the coast of Nassau. Tropical fish are in abundance, and there is a great wreck you can explore.

Bimini is an underwater paradise, and year after year, thousands of snorkelers from around the world come to marvel over the black coral gardens here. Bimini is full of mystery and intrigue, with the most fanciful of snorkelers claiming the cluster of flat rocks off the northern shore of Bimini are in fact are the gateway to the lost continent of Atlantis. If the conditions are just right here, you can see the pods of spotted dolphins playing in the surf.

Andros is home to the highest concentration of dive sites in the Bahamas, not to mention the third largest reef in the world, and approximately 100 miles of drop-off diving into what's known as the andldquo;Tongue of the Oceanandrdquo;. There a few snorkeling sites around here shallow enough to snorkel, and when you're done, you can scout out your dive spot on an excursion.

With 130 miles of pristine cays and beaches to wander, year after year, the Abacos is hailed as the most idea of snorkeling spots. The visibility here is just about as perfect as it gets, all because of their close proximity to the cleansing currents of the Gulf Stream. There are plenty of tropical species to behold and the reef's vibrant colors will will take your breath away.

This is but a small sampling of all the amazing snorkeling spots around the Bahamas. It doesn't matter what island you call home for the duration of your tropical vacation, there is bound to be an amazing Bahamas snorkeling spot somewhere nearby.