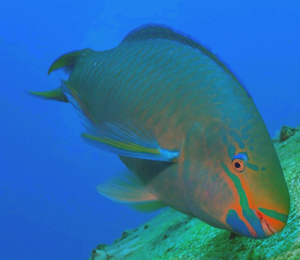 Nassau snorkeling tours can take you on an exciting underwater adventure where you may be able to watch some parrot fish. The name comes from their having a strong beak resembling a parrot's. Also called "Stoplight Parrot fish", they change from red to green like a traffic signal. You may see one green male and his harem of numerous red females. Amazingly, if a dominant male dies, one of the females will change gender and color and become the dominant male.

A good way to locate these reef fish when snorkeling is to look for bite marks the size of a quarter, which appear as white exposed patches in a colorful coral reef. The male fish bite chunks out of healthy coral to mark their territory and also to get to its food that consists mainly of algae-filled polyps that are extracted from the chunks of coral.

Very unusual are this fish's "pajamas." At night, certain species of parrot fish encase themselves in a cocoon of mucous secreted from their head. It is believed that this masks their scent, making it more difficult for nocturnal predators to find them.

Another unique trait is the fact that these fish "poop sand"! They digest the coral and release long lines of digested sand, as much as one ton of sand a year. This makes them some of the greatest fish producers of sand on the coral reefs.

Parrotfish are fascinating creatures, so check your Nassau snorkeling tours to choose one that will take you to see them in all their glory.