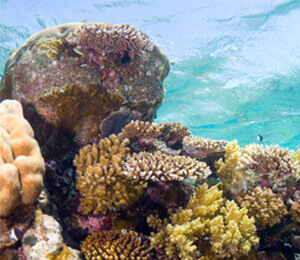 Learn More About the Importance of Coral Reefs

Bahamas snorkeling enthusiasts know just how beautiful the underwater world of the coral reef is, but these reefs are far more than just aesthetically-pleasing scenery for divers. For many island nations and coastal areas, coral reefs are the backbone of the local tourism economy. Coral reefs are a habitat in and of themselves and they play a key role in the functioning of the entire ocean ecosystem, as well as world ecosystem. Destruction of coral reefs can have a dramatic effect on human and animal populations alike and support a number of vital functions.

What follows are just a few of the important key roles coral reefs play.

Coral reef-dwelling organisms utilize carbon dioxide in the ocean water to help produce hard shells as well as through natural filtration. These organisms help reduce the amount of carbon dioxide that enters the atmosphere. All ecosystems, not just the ocean, would be effected by the rise in carbon dioxide emissions that would result from large scale coral reef destruction.

Integral Part of the Food System

A good portion of the world's population relies of seafood for their primary source of protein. Fish and other seafood provide the bulk of the calories and nutrition to literally millions of people around the world. Texas Aandamp;M University reports that some 30 to 40 million people rely of fish and other seafood that relies on coral reefs each year.

As key nurseries for a number of fish species that are either used for food themselves, or are the primary food source of other vital fish or sea creatures, damage and destruction of coral reefs can eradicate whole populations of fish that no longer have access to their breeding grounds. This can send shock waves through not only the human food chain, but the marine food chain as well, reducing the availability of food for a huge number of species.

Unencumbered coastline is a prime target for fast and aggressive erosion. Coral reefs provide protection to the coastline and reducing the rate of coastal erosion. The reefs also help to break up waves during high tide and during storm surges. This, in turn, protects the coastline from bearing the brunt of storm surges and tides. This is why they are also often referred to as barrier reefs.

Coral reefs are huge tourist attractions and these tourism dollars are often vital to the economy of an area. For many island and coastal areas, coral reefs are one of the main tourist attractions and tourism may make up a significant portion of the area's economy. Destruction of coral reefs reduces the value and attractiveness of these tourism areas, threatening the local economy by way of reduced tourism.

Coral reefs are far more than just eye candy for Bahamas snorkeling enthusiasts. These reefs play a vital role in the filtration of the ocean ecosystem. They are also incredibly important to the food chain due to their role as nurseries for so many species of fish and other ocean wildlife. Coral reefs also help protect the coasts from erosion, as well as direct hits from storm surges and provide immense economic benefits to surrounding nations by way of vital tourism dollars.